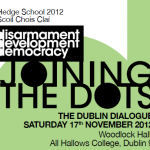 The International Peace Bureau is delighted to announce its decision to award the 2012 Sean MacBride Peace Prize to two Arab women: Lina Ben Mhenni from Tunisia and Nawal El-Sadaawi from Egypt. They have both shown great courage and made substantial contributions to what is known as the Arab Spring.

The award ceremony will be held on the eve of IPB’s annual conference, which this year doubles as Afri’s Hedge School. The prize ceremony will be held on Friday 16th November, at 6pm. The venue is Woodlock Hall, All Hallows College, Dublin 9. The Hedge School will be held in the same venue the following day. This will be the first ever IPB Council meeting in Ireland in its over 100 year history during which it will be hosted by Afri, a member organisation of the International Peace Bureau.

The presenter of the awards will be President Michael D. Higgins, himself the very first winner of the MacBride Prize in 1992.

Every year the IPB awards a special prize to a person or organisation that has done outstanding work for peace, disarmament and/or human rights. These were the principal concerns of Sean MacBride, the distinguished Irish statesman who was Chairman of IPB from 1968-74 and President from 1974-1985 and special advisor to Afri for many years.

MacBride began his career as a fighter against British colonial rule, studied law and rose to high office in the independent Irish Republic. He was a winner of the Nobel Peace Prize (1974) – and also the Lenin Peace Prize — awarded for his wide-ranging work, which included roles such as co-founder of Amnesty International, Secretary-General of the International Commission of Jurists, and UN Commissioner for Namibia. While at IPB he launched the Bradford Proposals on World Disarmament, which paved the way for the first UN Special Session on Disarmament, held in 1978. He also launched the MacBride Appeal against Nuclear Weapons, which gathered the names of over 11,000 international lawyers from all parts of the world, many of them at the very highest level. This initiative led to the World Court Project on nuclear weapons, in which IPB played a major role. This in turn resulted in the historic 1996 Advisory Opinion of the International Court of Justice on the Use and Threat of Nuclear Weapons. MacBride died in 1988, but the Prize was not established until 1992, IPB’s centenary year.

The award is decided by the IPB Steering Committee. The Prize is a non-monetary one, consisting of a bronze medal made from recycled metal from US nuclear missile parts.

People in the Middle East/North Africa region have expressed their desire for genuine participation in decisions concerning the future of their countries. Both laureates are in the forefront of this movement. Nawal El-Sadaawi has a long and impressive record of several decades of activism and professional engagement in favour of women’s rights and against oppression and injustice. Lina Ben Mhenni engaged herself deeply in the fight in her country against oppression as a young blogger. She used the new social media tools to share information on what was happening in her country. Ingeborg Breines, IPB Co-President, commented: ”There are real signs that the Arab Spring is giving rise to a religious fundamentalist backlash and new forms of military dominance – which can be very detrimental to popular aspirations for democracy, not least to women and the poor. IPB is therefore proud to honour these two women and their struggle for a real participatory democracy, with equal rights for women and men and with opportunities for each person to develop their full potential. IPB intends to partner with other organizations and institutions in order to help further peace and democratic development in the region.”

An Internet activist, blogger and assistant lecturer in linguistics atTunisUniversity. During the rule of former Tunisian President Zine El Abidine Ben Ali, Mhenni was one of the few bloggers to write using her real name rather than adopting a pseudonym to protect her identity. Her blog, as well as her Facebook and Twitter accounts, were censored. Mhenni began posting photos and videos of protests and of those injured throughoutTunisia. In an effort to make the government responsible for its actions and for the people who were harmed in these uprisings, she visited local hospitals and took pictures of those injured by police.

In January 2011, she covered the early weeks of the Tunisian Revolution from Sidi Bouzid Governorate in the interior of the country. Mhenni was one of the few bloggers present in the interior cities of Kasserine and Regueb when government forces massacred and suppressed protesters in the region. Her reports and posts provided uncensored information to other Tunisian activists and the international media.

Since the Tunisian Revolution began, Mhenni has continued to play a prominent role amongstTunisia’s democracy activists, speaking out against continuing corruption in the regime, against the “double discourse” of Ennahda, and demanding the release of Alaa Abdel-Fatah upon his arrest in October 2011.

An Egyptian feminist writer, activist, physician and psychiatrist. El Sadaawi has written a large number of books, both fiction and non-fiction, linking political, economic, sexual, and religious oppression of women and the poor. She has given much attention to Female Genital Mutilation, linking FGM to global and local politics. She is founder and president of the Arab Women’s Solidarity Association and co-founder of the Arab Association for Human Rights.

Her novels and other works on the situation of women have had a deep impact on successive generations of young women and men over the last five decades. El-Saadawi has been awarded several prizes, has lectured in many universities, and participated in numerous conferences. Her works have been translated into more than forty languages, and some of them are taught in a number of universities. However, as a result of her literary and scientific writings she has faced numerous difficulties and dangers in her life. She has been taken to court, spent time in jail, some of her books have been banned and her association closed down.

She has been awarded honorary degrees on three continents. For instance in 2004, she won the North-South prize of the Council of Europe; in 2005, the Inana International Prize in Belgium and in 2011 the Woman of the Year Award, London She has also a series of honorary doctorates in different universities.

The International Peace Bureau is dedicated to the vision of a World Without War. The IPB is a Nobel Peace Laureate (1910) and over the years 13 of our officers have been recipients of the Nobel Peace Prize. The IPB has 320 member organisations in 70 countries, and individual members, forming a global network bringing together expertise and campaigning experience in a common cause. The current main programme centres on Sustainable Disarmament for Sustainable Development.   See www.ipb.org for more details.